How to extend the life of the generator and water pump bearings on the T-Series, MGA and early MGB.
Written by Dave DuBois (RIP) – 2007-02-10
How-To Library > Cooling and Heating Section

All of you who have been around me for any length of time have heard me preach about keeping the fan belt on the T series cars loose. A tight belt will do really bad things to the generator (kind of like what over tight underwear does to a person, but that is a subject for other publications), like causing excessive wear on the rear generator bushing and in severe cases, actually wearing through the bushing and into the housing. It also causes sloppy water pump bearings and water leaks according to Stuart Locke, who has rebuilt numerous generators and water pumps for people that keep their belts too tight. The same thing is true for the MGA and the early MGBs that use generators rather than alternators.

I have always followed my own advice and kept the fan belt in our TD EXTREMELY loose. So you can imagine my surprise a couple of months ago when I traced the source of squeaking in the engine compartment to be the generator armature rubbing on the field poles because the rear bushing was worn excessively. I pulled the generator and did a quick overhaul, cleaning it up, replacing the rear bushing and brushes and repainting it. Then I started puzzling out why the rear bushing wore so quickly (if you consider 15 years to be quick). Interestingly, at the same time I was working on an article, Stuart Locke was doing the same thing some 600 miles south in Sunnyvale. His article arrived about two days after I had given mine to Liz for the Bonnet, so after consulting with Stuart, I am combining the two articles.

Since the fan belt that was originally on the car when I bought it in 1974 was a bit over sized, I had replaced it when I restored the car in the early 80s. At that time the belts from Moss were a solid and very stiff belt, but I didn’t give that much thought at the time. In revisiting the situation after rebuilding the generator, I took a more critical look at the belt I had been using and dug around until I uncovered the original belt (the one that was too long). What I found was that the original belt was a Gates Green Stripe belt that was segmented on the inside edge and was, therefore, a very flexible belt. When installed, it could be run very loose and as a result, put very little sideways pressure on the generator pulley, which results in very little pressure being transmitted to the rear bushing through the armature. 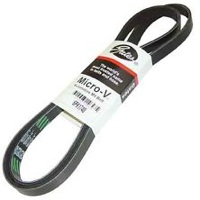 I then embarked on a search for one of these really flexible fan belts and through trial and error and a very helpful auto parts store in Bremerton, who special ordered goodness knows how many different sizes of belts for me from Seattle, found the proper size Gates Green Stripe II belt. This belt is also segmented on the inside surface. Although the segments are much wider than on the original Green Stripe belts, it still results in a much more flexible belt than what I bought from Moss. The part number on this belt is TR22392 and it is a 11/16” X 39 3/4" (17mm X 1010mm) Truck and Bus series belt made by Gates.

In his article, Stuart tells us that the Goodyear 22394 belt is 22/32” X 39 1/2" (17mm X 1005mm) and that the Moss belt is not only very stiff, but is also considerably shorter at 17mmX 925mm 1(about three inches too short), which I found when I was special ordering all those belts trying, to find the right one. Additionally, Stuart found in a 1949 book, Exploring Auto Mechanics by Harold T. Glen that the fan belts on the TCs and TDs (and by extension, the TFs) should be adjusted to have ONE INCH of slack between the generator and the water pump (not on the longest leg as we are used to).

By the way, as I said earlier, the same problem exists on the MGAs and early MGBs, but is not so pronounced since they use the later style narrow fan belts which are much more flexible than the ones used on the T series cars. The fan belt still needs to be run quite loose (one half inch of slack between the generator and the water pump, rather than on the longest leg) on the MGAs and MGBs to prevent premature wear on the rear generator bushings.

My source for the belts over here in Kitsap County is Westbay Auto. Those of you in Seattle, Tacoma and other areas will have to check around for the Gates belts or Stuart tells us the Goodyear belts are available from Skip Kelsey (Shadetree Motors Ltd) at 925-846-1309. So now you have no excuse not to loosen up and get comfortable.

Some additional sources and part numbers for the proper belts:

— Keep Your Fan Belts Loose —
Written by Dave DuBois (RIP) – Created 2007-02-10 Published 2007-02-10
Contents © Copyrighted and published under the following terms:
Released under the terms of the CC Attribution-NonCommercial-ShareAlike 2.5 License