These photos are of what the first of the MGBs had in their footwells as far as carpet: (none), rubber and vinyl covered hardboards go.

These apply to the earliest of pull handle cars. This one is an unrestored, scrupulously maintained as original, MGB car #1105.

Please note that these apply with respect to the hardboard (up to approx car #2600) dependent on interior colour. After that they change to carpeting on the front toeboard and sides of the tunnel. 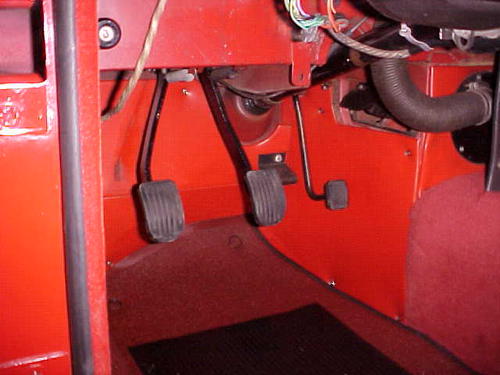 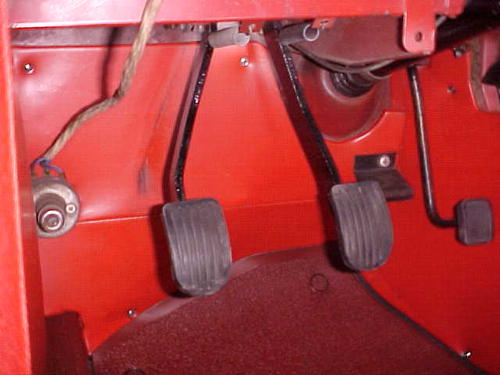 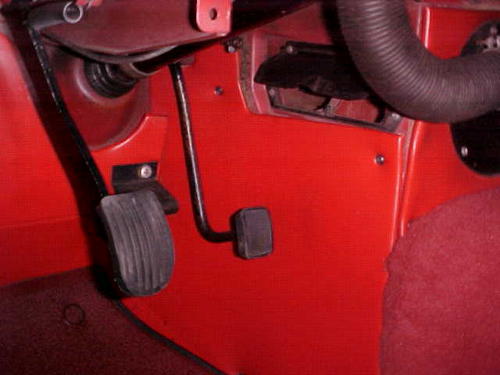 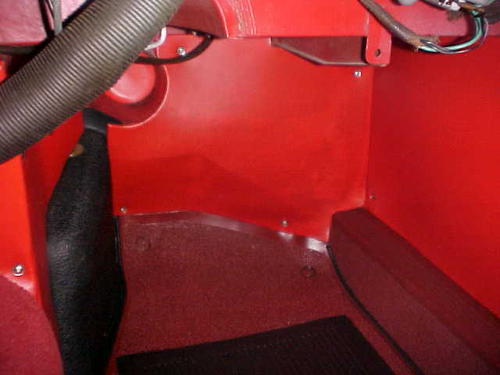 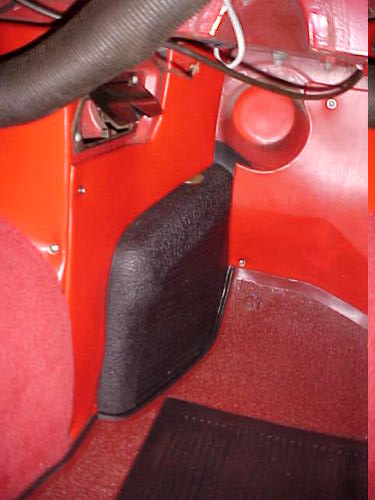 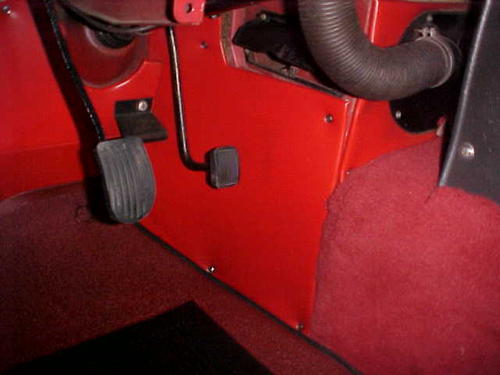 In order to secure a spare wheel to the boot floor of the MGB, various design clamps have been designed and applied.

The original wire wheel clamp has only been supplied for cars up to chassis GHN3/4514 in December 1962. It had a cylindrical head, sticking well above the spare wheel. This protruding area often caused damage to the luggage. 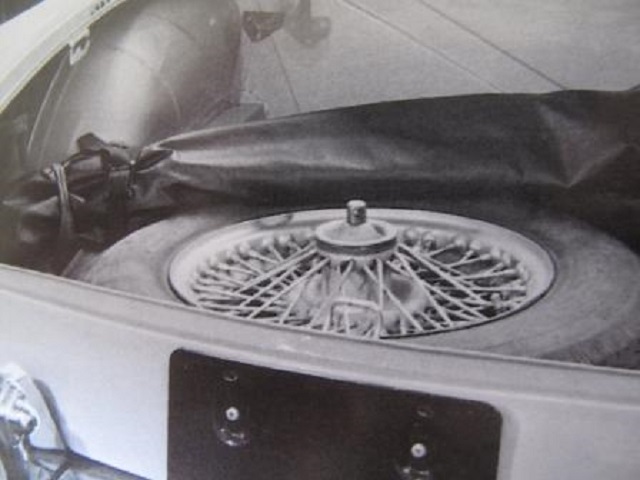 The later design clamp is a simpler design that would cause less damage to luggage. It has a flat bar across the top protruding to a lesser degree above the spare wheel. 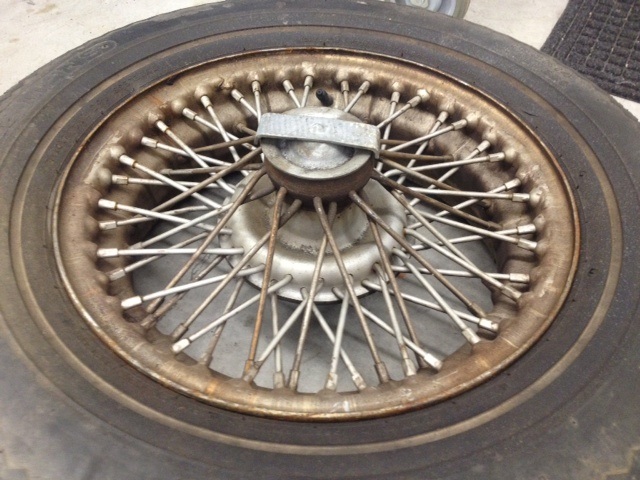 The spare wheel clamp issued for the standard steel wheels was retained right-up to the introduction of the Rostyle wheels in 1969. 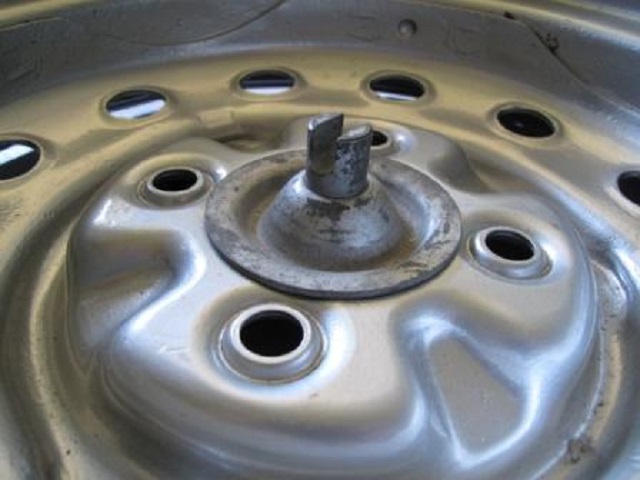 Upon working out the mechanical details of these two setups it became evident that mechanically it was not possible to have the gear lever for both transmissions in exactly same position. Due to this complication the hole for the gearlever in the car body was chosen to be oblong. The gear lever of the standard 4-speed transmission would pass through the body further forward from the driver than the lever working the overdrive transmission.

For driver's ergonomic comfort the position of the gearlever knob was chosen to be best where the knob of a lever that passes through the rear part of the oblong hole, close to the driver.

In order to meet this requirement the position of the standard transmission lever knob had to be in same position as the one of the overdrive transmission.

This the reason why a Mk I MGB is fitted with a lever that is bent in the typical way only intended for a MGB with standard transmission. The lever is bent towards the driver.

Cars fitted with an overdrive transmission have their lever passing through the oblong hole towards the rear. This particular lever is straight as the lever knob is in the correct position. This lever is simply straight instead of bent.

Apart from this apparent difference, these two gear levers also differ in length by which they stick into the gear selection mechanism.

By using a bent lever in overdrive transmission you run the risk of developing problems switching gears. 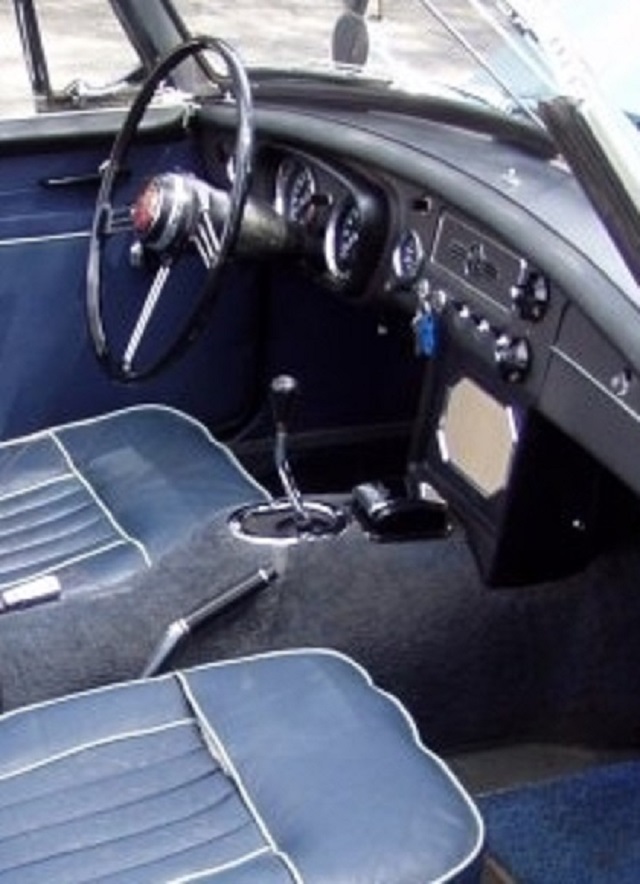 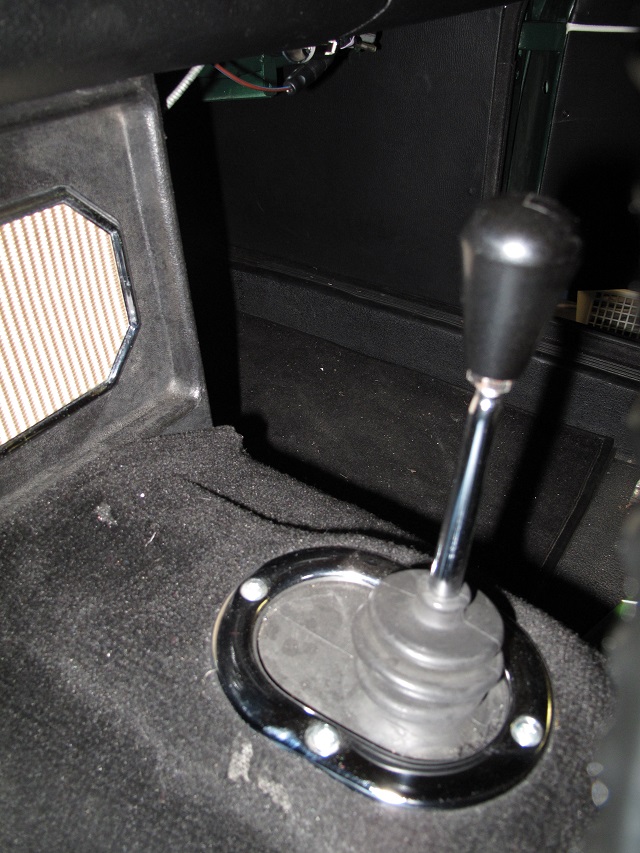 Early MGBs used staples and wood to secure the upholstery to the seat frames backs. This was a carryover from MGA production and although unsure of the change over date to half inch clips, car # 8273 still had use of the staples and wood. 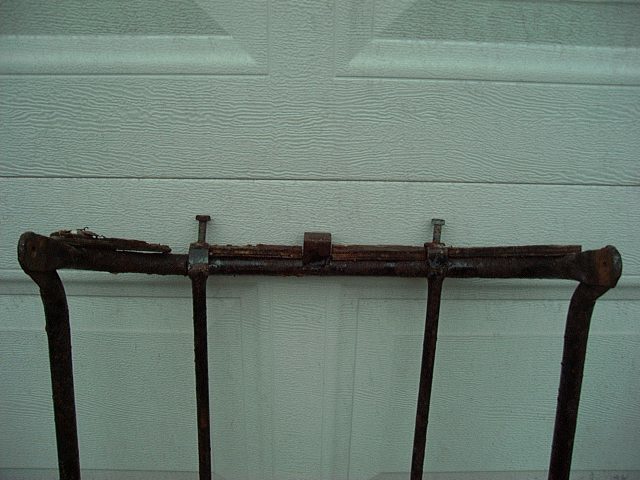 Showing how the wood was secured to the frame. 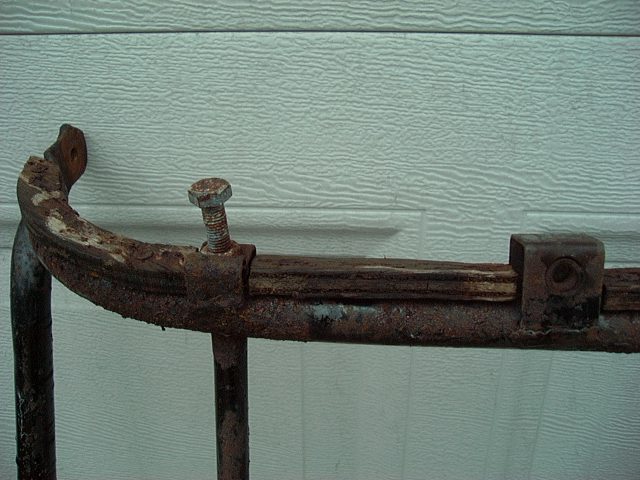 Another view showing how the wood was secured to the frame. 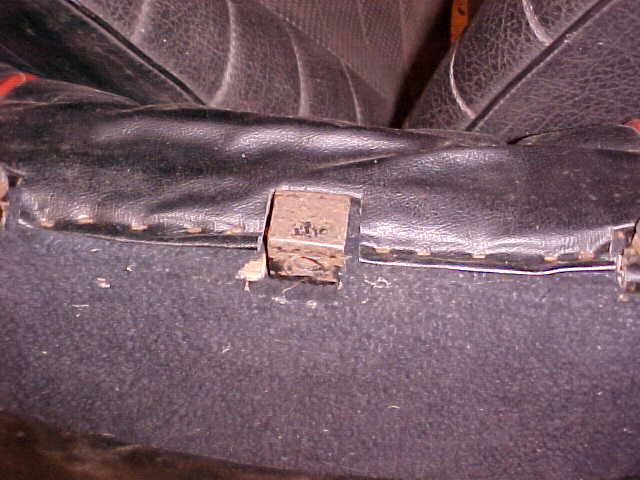 Illutrating how the upholstery was secured to the wood via staples. 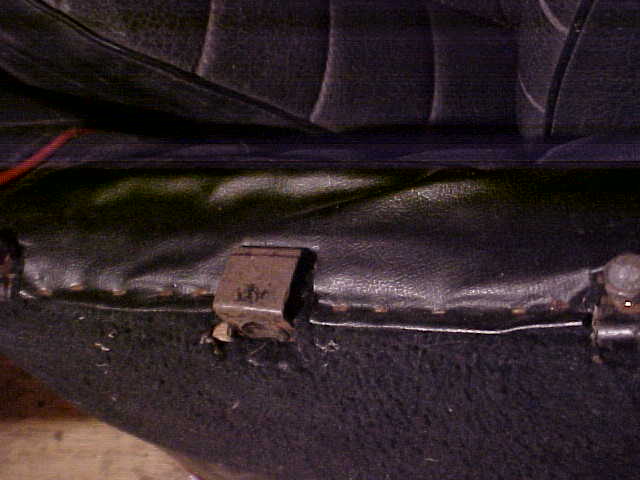 Another view showing the staples securing the upholstery. 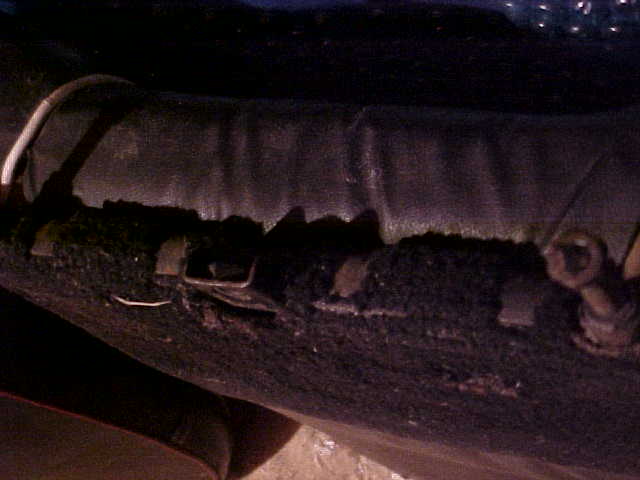 Contrasted with a seat back from a later MKI seat frame back. Notice the use of the 1/2 round clips. 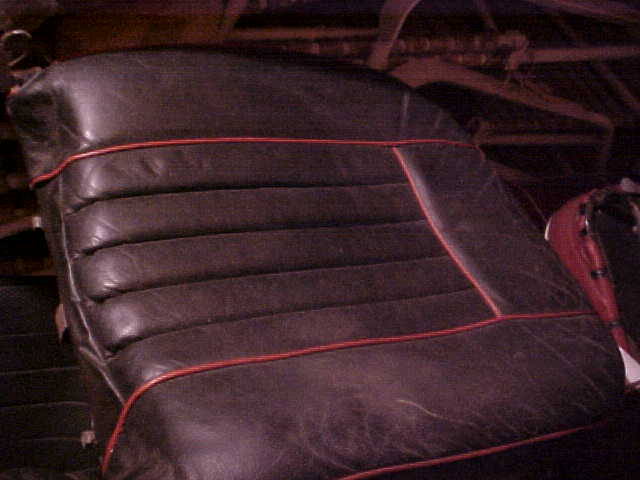 Last, a photo that illustates the style of upholstery used on MkI seat frames, either the early wood and stapled secured type, or via the black clips.

The original seats for the MGB were carefully designed comfortable leather seats.

It is surprising that 99% of the newly manufactured replacement seats fail to comply, although the foam bottom, which lies on top of the diaphragm, is correctly shaped. The foam bottom has, on purpose, a more or less square recessed area. The idea is that you sit in, instead of on the seat. Although not exactly a bucket seat, the design of the seat bottom is to prevent the occupants from sliding around on their seat while driving.

This centre section consists of five flutes lying slightly lower than the frontal and lateral bolsters of same seat bottom. This centre section is reinforced with heavy duty cotton, which has been sewn together with the piping and leather during manufacture. The cotton will prevent the leather from stretching as the cotton will take the load of the seated person. Sitting on the seat, the cotton takes the loading across the seat from one lateral bolster to the other.

The bulbous effect of each flute is brought about by a piece of half round foam. It is about 6 to 8 mm high with the width and length of a flute. Between the leather and cotton of each flute this foam has been slid into place.

The combination of the cotton, the foam underneath the flutes, as well as the string will give the seat bottoms a fresh and inviting impression. 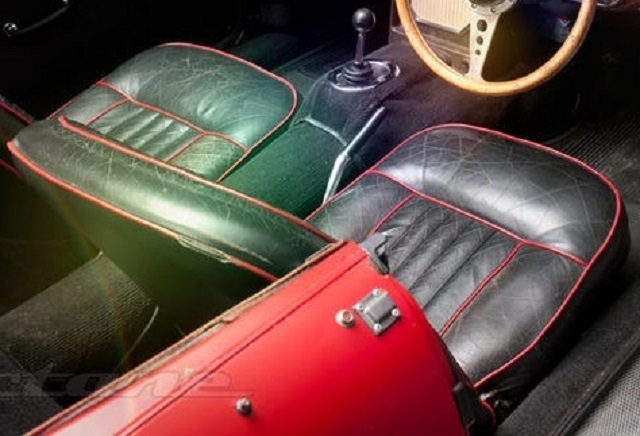 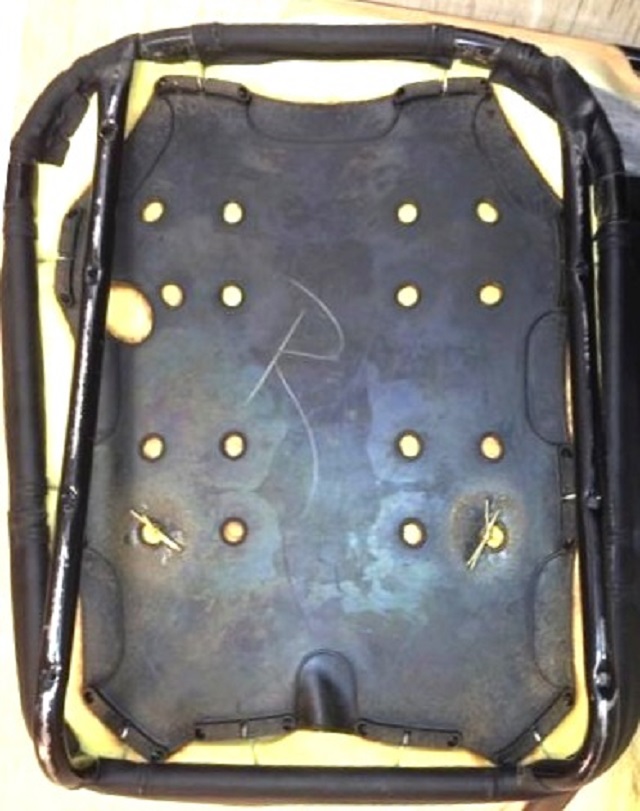