Correct Stowing of the Packaway Top Frame, Top, and Ancillaries

More detailed instructions for folding and storing the top/hood for all MGB models can be found in the MG Experience Tech Library - Tops and Windows section. 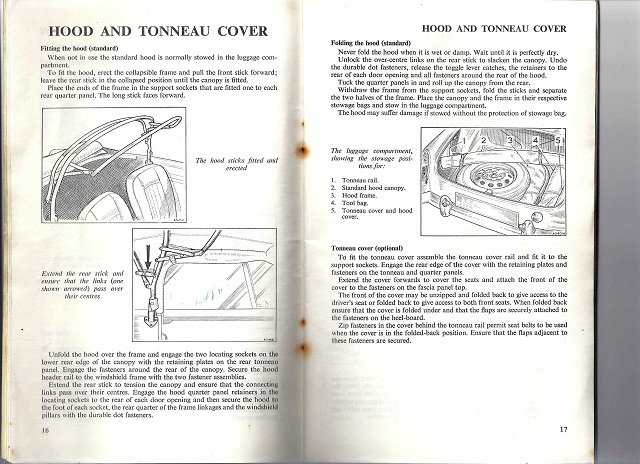 Author: A. Henderson with contributions from J. Prewer

Important Safety Note: If you own original seatbelts, they are probably unsafe to use and should be professionally rewebbed before usage. Seat belts are required to meet specific safety standards. There are several companies qualified to professionally reweb vintage belts using original hardware. Please use one of them.

As seat belts were never factory fitted until 1968, there are some discrepancies in the information available as to what was actually fitted. MGBs did have factory mounting for lap belts with a captive nut in the rear of the inner sill, and a pressed opening in the rear of the transmission tunnel to suit either bolts, or ring bolts as used by Britax in the belts I show. The dual bolt rear mounting point may have been designed to take a shoulder strap, but may also have been designed to allow the fitment of 2 rear seatbelts, using a central mounting point. for the 2 centre strap pieces. The MGB GT actually has this rear centre mounting point designed into it below the wood trunk floor, and a rear seat cushion was optional in the roadster from the beginning.

From personal experience, lap belts were what was commonly fitted, at least to North American MGBs, and in fact no North American cars of any brand had shoulder harnesses as standard fitted until 1969. Perhaps a viewer of this article will comment relative to what was fitted in the UK.

Clausager states that Britax belts were fitted to early cars, with a change to Kangol. This bears out my personal observations. I have not seen a Britax 3 point belt fitted into an early MGB, only the lap belts. It is important to stress that if 2 point belts are fitted they must use the 2 low side mounting points and not the rear point with 2 bolts, as that mount would place the belts far too high on the body of the wearer for safe usage.

I have several sets of BMC and British Leyland branded lap belts that were made in the USA, and likely sold through dealers as well.

The Kangol belts used were available as a 2 point lap belt, and later a 3 point belt/shoulder belt using a rear pick up point, which may have been the double 1/4 inch studs low on the rear wheel wells. The Kangol belts all relied on a magnetic hook portion, and that is the part that goes into the seat belt keeper just behind the door opening. The photo attached clearly shows the hooked portion of a Kangol belt hanging from the retainer (this photo of an early MGB GT is from Clausager's book). That little retainer was supplied with the Kangol belt kit, or factory installed from 1968-71 when the Kangol belts were factory installed. The double stud mount was deleted from MGBs in 1966-67, changing to a captive nut plate welded into the rear wheel well. This made it easier to use a more conventional single hole mounting.

The following are numerous photos of my NOS Britax 2 point belts which were sold and packaged specifically "for MGB". These came from very old dealer stock out of the US and I acquired them a few years ago. When time permits I will dig out some of the other early lap belt sets I have and take photos, and as well the early 3 point Kangol set, although as far as I can tell this didn’t become optional until at least late in 1966.

Dependent on your state, province, country, or Department of Motor Vehicles you may find that it is legal to drive your early MGB with no seat belts fitted. Generally 1968 was the first year that seat belts were required to be fitted to new cars, and actually being required to wear them varied from jurisdiction to jurisdiction for many years after that time. Today the rule of thumb is that if belts are fitted to the vehicle, they must be worn. 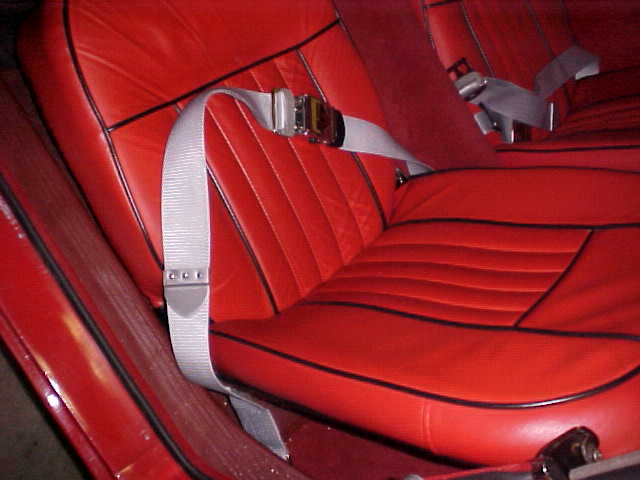 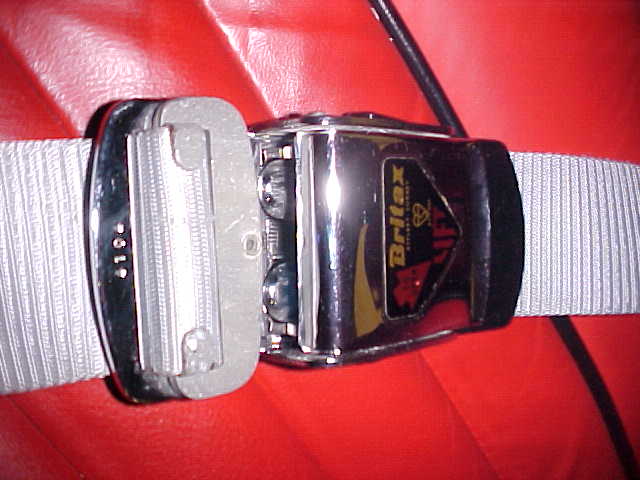 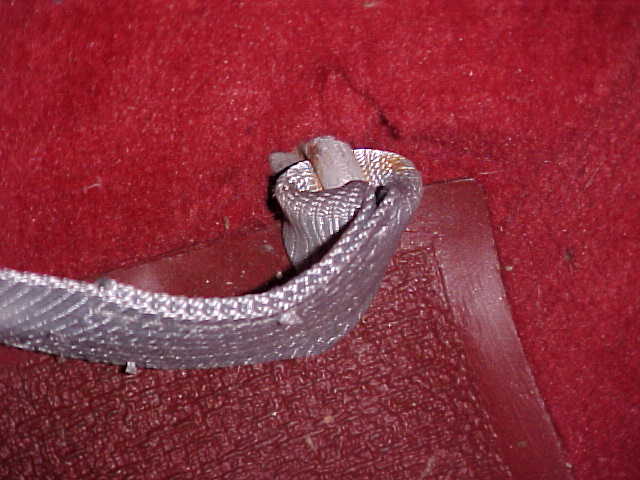 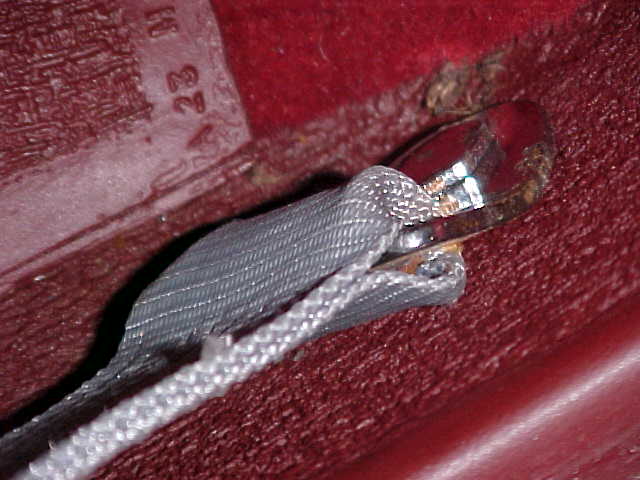 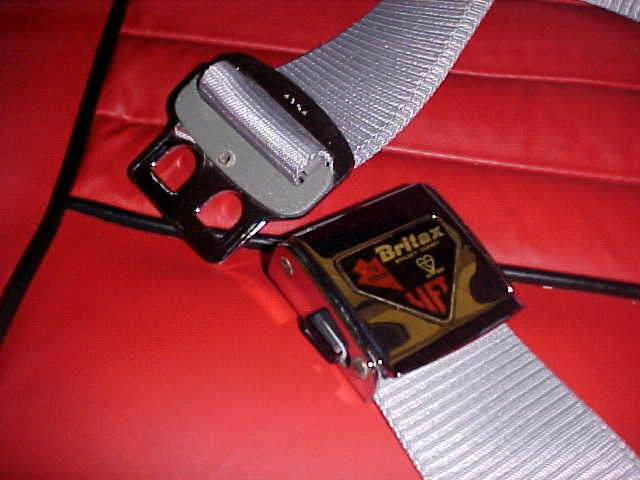 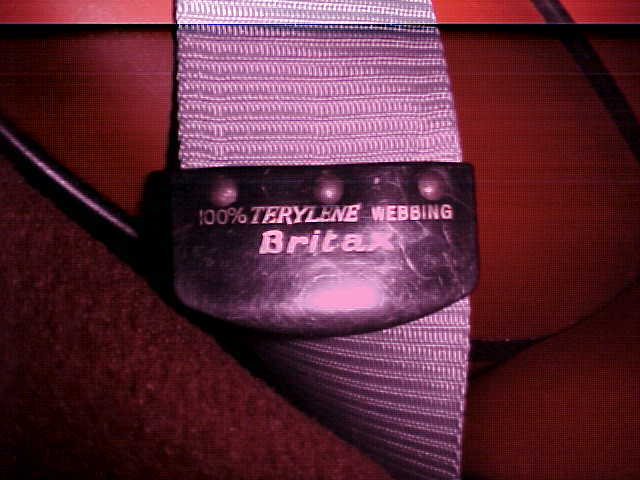 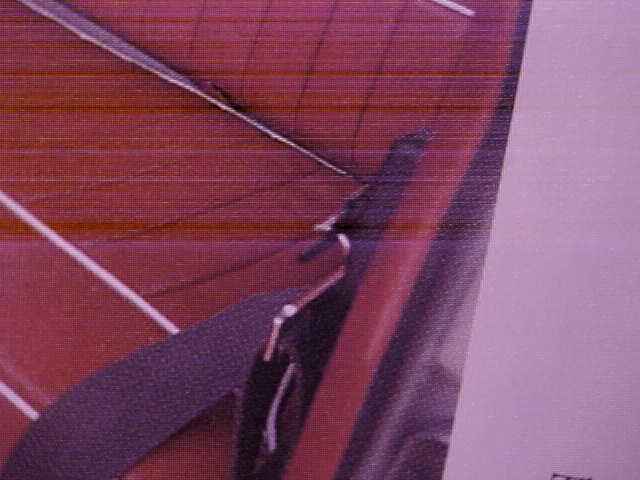 Early gaiters were simple, with the large flat portion at carpet level and the bellows portion extending down the gearshift rather than up as became common on later 1963 cars. I don’t know the change point, but from what I have read only perhaps a thousand cars used this gaiter. It is not stocked by usual sources to my knowledge. 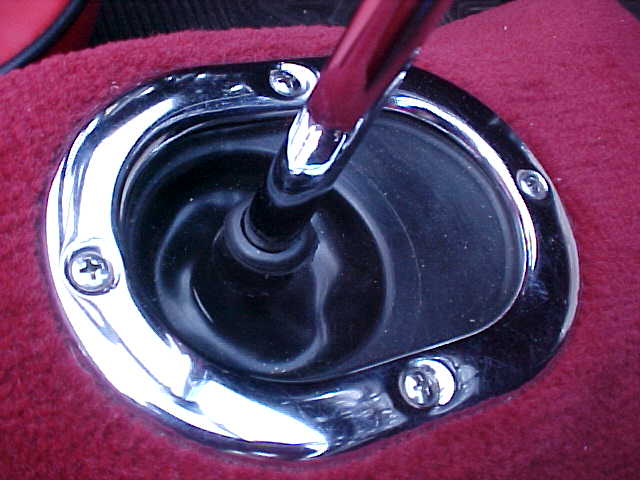 Many Mk 1 MGBs seem to have the carpet installed, and then the speaker housing placed on top of the carpet. The carpet should actually be installed after the speaker console, and folded back under on 3 sides of the console to provide a proper finished edge. 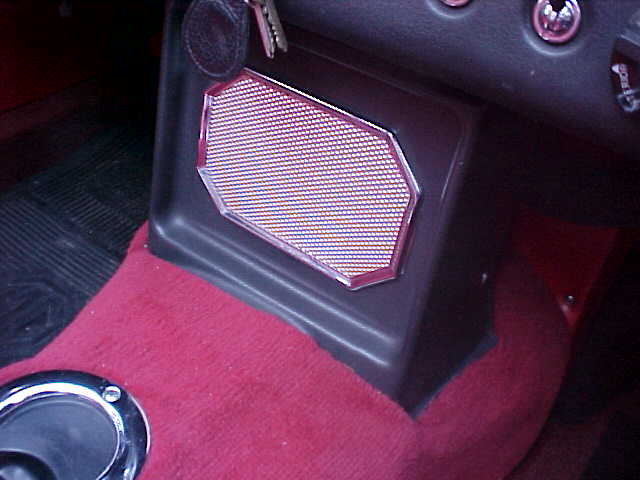 Accessory Consoles for the Early MGB

Interior consoles were a popular item added by some owners to their cars. They provided a centre armrest, a hidden cubbyhole for items best kept out of sight, and some would say they finished off the interior of the car.

The only 2 correct consoles for early MGBs to the best of my research and knowledge were marketed by AMCO, based in California, makers of accessories for numerous sports cars of the time. These were available by mail order, and often sold through the parts departments of local MG dealerships as well.

Unfortunately the full length console for the early MGB was a rather fragile affair of injection molded plastic, often cracking in various places likely due to owner abuse. As well, strong sun tended to bleach the original black colour from them. Finding a usable one can be quite a quest. Very occasionally used ones show up on Ebay, and over the past 10 years I have seen perhaps 5 NOS ones sold, usually for a significant price.

The Full Length Console provided: (Photos 1 and 2) From the rear: A speaker housing with a chrome bright work grille which could include the speaker if ordered. Next, an armrest upholstered in black vinyl which opened to a shallow bin suitable for change, keys and other necessities. A plugged hole suitable for installing a Tasco cigar lighter, and again the lighter unit could be supplied with the console. 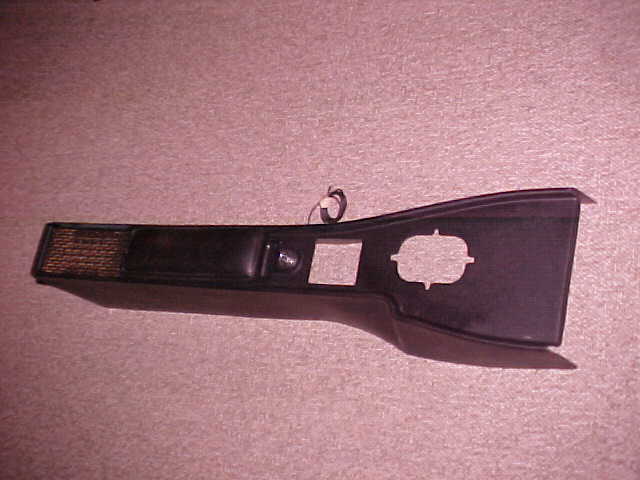 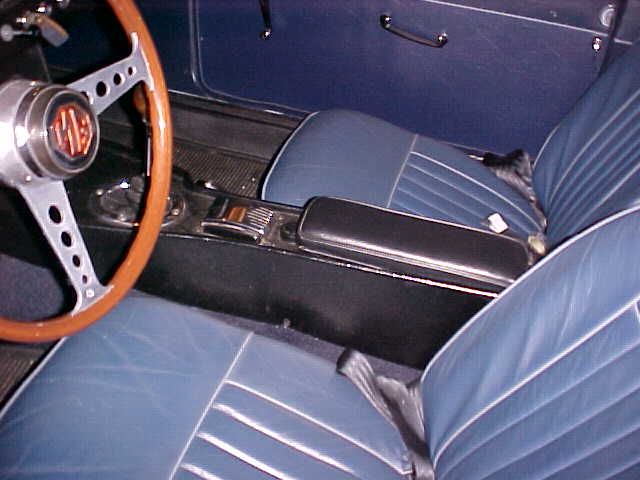 A cutout suitable for installing the early factory ash receiver with the 4 exposed screw holes.

This console fitted flush to the front speaker housing and butted up to the rear heel board. It required drilling several small holes and fastening it through the carpeting with self tapping screws.

The second console was a much shorter and simpler affair which fastened to the centre tunnel with 4 screws. It provided an armrest, a storage area under the armrest and a small recessed bin to the front of the armrest suitable for change. 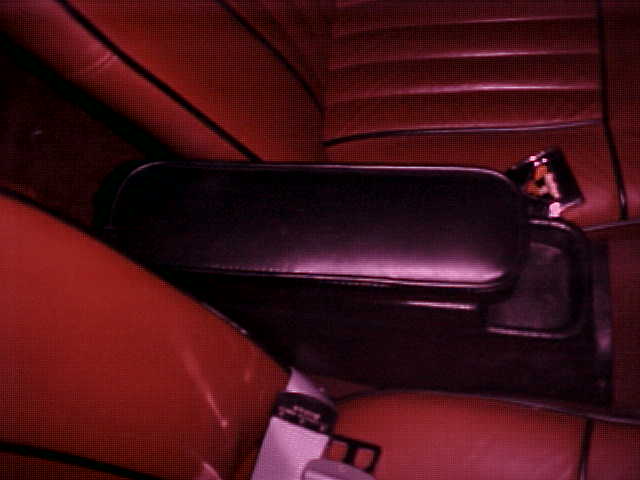 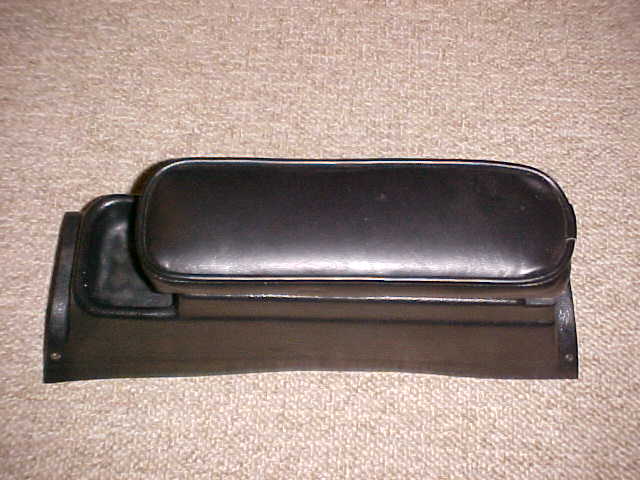 It left the front portion of the tunnel as per the factory. This short console is seldom seen, perhaps because the full length one was more popular.

Clark and Clark has manufactured one which serves the same general purpose but is different in appearance. These are sold today through Moss Motors.

The early accessory catalogue I have does not list these consoles as factory accessories It is however interesting to note that the sales literature for the next generation of MGB, the 1968-71 actually shows the AMCO console installed in a 1971 MGB GT.

At some point, the location of the Trunk Rod Support bracket changed from closer to the Wheel well to further back in the boot. I was unable to find a changeover point. 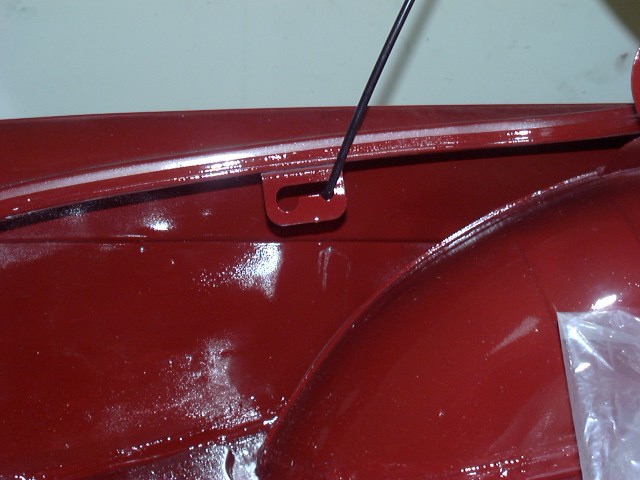 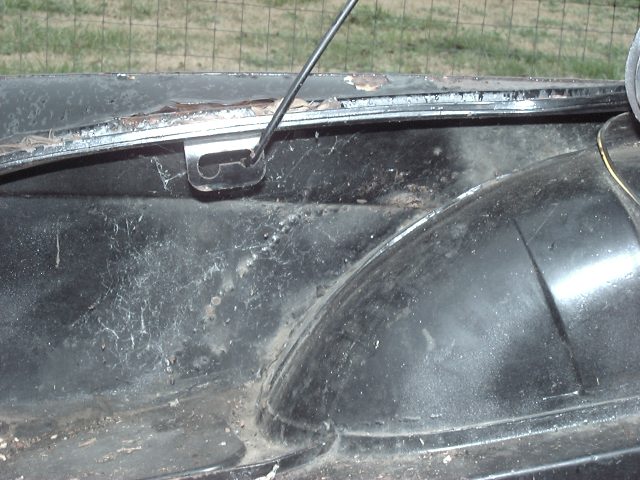