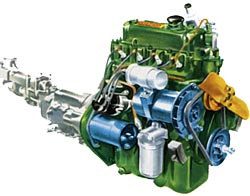 Although I am a Sprite novice, I have built more engines than I can recall during my tenure as a professional mechanic for American automobiles in what seems like a previous life. Over the years, I developed many opinions as to how to successfully seal them against leaks. Recently, I performed a complete overhaul on the 1275cc in the 67 Sprite I acquired 6 months ago and applied my sealing techniques during the re-build. I am happy to say that after the first 400 miles, my engine has not leaked one drop of anything onto the white cardboard I have placed under the car when it is parked in my garage. I am not inferring that I am a Sprite expert in any way, but offer my opinions for your consideration. If I state something that is obviously stupid, let me know so I can learn.

Sprite engines are similar in basic design to American-made motors, except that they have no rear main oil seal. Instead, the rear-main cap / rear cap cover are machined to tight tolerances with the "sealing surface" (for lack of a better word) of the crankshaft. There are spiral grooves machined into the "sealing surface" to pull any escaping oil back into the crankcase. The fit of the cap and cover in relationship to the crankshaft is critical for oil control. If the block is line-bored, or if the cap/cover is allowed to scrape on the crank, this critical fit could easily be destroyed. There are kits available for installing a true rear main seal, - they are an option.

The 1098 and 1275cc engines have a PCV system that is supposed to maintain a vacuum on the crankcase. Air is drawn into the engine, by the PCV system, through a calibrated orifice in the oil filler cap. Maintaining such a vacuum certainly helps prevent oil from flowing through the tight tolerances of the rear main cap/cover. (The 948cc engine has a draft tube that creates a vaccum in the crankcase when the car passes through the air, but only vents the crankcase when the car is sitting still.)

The previous owner of my Sprite decided that a PCV valve was a "bad thing" and removed it as well as the hose leading from the oil separator mounted on the timing cover. Since the engine was in need of serious repair (2 exhaust valves leaking, >0.010 cylinder taper, flat cam lobes, etc), consequently there was considerable blow-by with no place to go except out the front cover, rear main, and every other seal on the engine. When pressure would build up, about a pint of oil at a time would blurb out the open orifice in the oil separator, all over the front of the engine and engine compartment. The moral to this story is that one should expect an engine to leak oil if 1) the crankcase ventilation system is not working properly and/or 2) excessive blow-by is present. On a 1098 or 1275cc engine, the idle RPMs should rise if the oil filler cap is removed (from my shop manual), thus indicating a vacuum on the crankcase was present before removal of the cap (assumed). If your car does not pass this test, you need to find out why and fix it or buy a big bag of oil dry and a case of oil to put in the trunk.

Installing the rest of the gaskets except for the head and intake/exhaust gaskets:

I meticulously cleaned all sealing surfaces with carbuetor cleaner and a rag and inspected the bolt holes in the timing cover and oil pan for distortion from over-tightening, using a carpenter's square as a straight-edge. If a bolt hole was found to be pulled to far in, I put a big punch in the bolt hole and knocked the distortion back. Gaskets were coated on both sides with Form-a-Gasket #3H before installation. The front and rear oil pan corks were positioned in the oil pan and cut off 3/8" above the pan surface to ensure compression and a tight fit. The oil pan side gaskets were placed in position on the block and their ends as well as the end-seal sealing surfaces on the block were liberally dabbed with additional Form-a-Gasket. The end-seal guides in the pan were coated with Form-a-Gasket, the end seals were installed in the pan, the end-seals were coated again, and the pan was installed with a new bolt/washer kit. I did have to clean up a lot of squeezed-out sealer with a rag and rubbing alcohol. The rest of the gaskets were simply coated on both sides and installed, except for the intake/exhaust gaskets and the head gasket on which no sealer was used. I did use an accurate 10-75 ft/lb torque wrench on all bolts and re-torqued them after several days had passed.

The first head gasket I installed leaked bubbles of compression gasses out the threads of one head stud nut, while cranking the engine (without ever starting it). This gasket was obviously a bargain-basement item that came with the VB head kit as it had no markings as to what was "up" or "front". I may have installed it upside down but it should have sealed on the newly machined block and head surfaces, at least during cranking. After removing the head and gasket, nothing apparent could be found. I went in search of a quality head gasket and found out I could special order a head gasket from Fel-Pro through my local parts store. It cost more than the whole head set from VB but this gasket is a composition type gasket that comes pre-printed with special sealer on both sides and even has copper rings for the water passages - very impressive. I bought new grade 8 washers and small block Chevy rod nuts to fasten the head down and carefully wire-brushed all the head stud threads until the nuts could be literally spun down by brushing your hand against them. When going back together, I oiled the new nuts/washers and torqued the head down in 10 ft/lb increments, using the appropriate sequence.

— Building a No-Leak A-Series Engine —
Written by Les Myer – Created 2012-01-16 Published 2012-01-17
Contents © Copyrighted and published under the following terms:
Copyright © the author and published by permission or fair use.